With the introduction of the Hurontario LRT in Mississauga, a dense and walkable neighbourhood around the Cooksville GO Station is being forecasted for the coming decades. The first building to be realized by the transit authority as part of this transformation will be structured parking for 1900 cars on the station lands. This design project considers the parking garage, with an estimated service life of 30 years, as a setting for the future. The project lays the first brick in a new urban paradigm for Cooksville, by using the mass of the parking structure to carve out a new commons for the neighbourhood, city, and region. Four ‘places’ are proposed to firmly root the project in the site and allow it to become integrated as the surrounding area rapidly densifies and becomes a transit hub neighbourhood over the next 30 years. 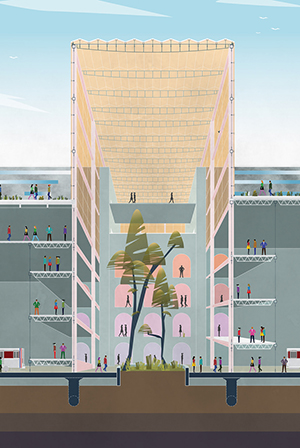