While working in the silkscreen studio at the Frans Masereel Centrum in Kasterlee, Belgium, I became interested in using shadow shapes as a point of departure for creating narratives. Beginning with a simple, dark, and vaguely figurative shape I used a reductive screen printing process. The only known when I began the process was the shape of the shadow. I found the pace of the process itself began to assist in creating the content. More details were added with each each colour and a loose narrative developed within this shadow format. I found it interesting to mix a graphic and visually direct language with loose and improvisational content. Through the reductive screen printing process, the shadow space became a repository for narrative content that was further subdivided with each colour added to the composition. The process of layering colour adapted the improvised, time-based narrative into a simultaneous format. 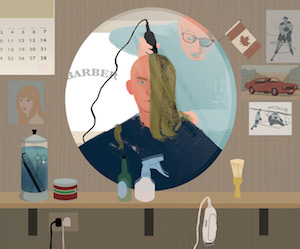